THE LEADERS SUMMIT FOR DEMOCRACY 2021: A PROPOSAL FOR A MASSIVE AND EFFECTIVE LEADERSHIP PROGRAMME FOR THE DIGITAL AGE 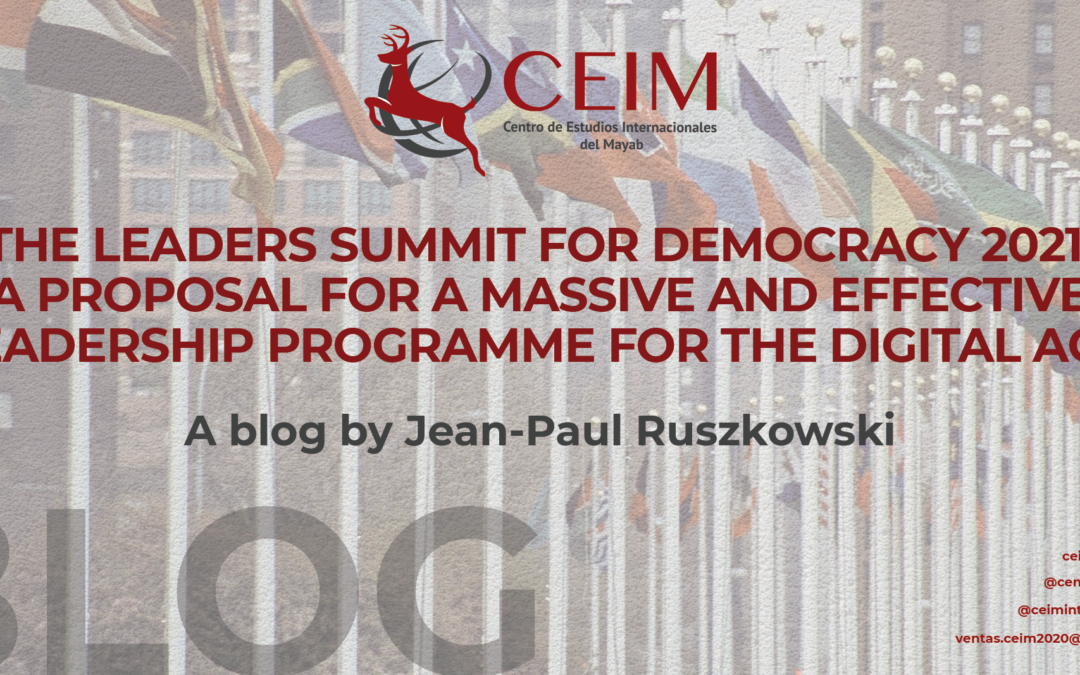 In essence, this means that people elect their leaders who represent them, and leaders govern for the benefit of the people.

Lincoln believed that this could work forever.

A great deal has happened since Lincoln’s time.

Some terrible events such as the Holocaust have shaped our thinking today.

There have been numerous technological discoveries; some have helped create wealth and increased our life expectancy.

Overall, living conditions have improved for a significant portion of the world’s population.

Today the number of illiterate people is much smaller than in the 19th Century.

Man has walked on the moon and so much more.

Social media, cyberspace and artificial intelligence are part of our daily lives.

COVID-19 has exacerbated persistent inequalities despite all the progress.

A substantial number of people feel vulnerable and anxious about their future.

The fear has allowed false promises by populist leaders to become attractive; as a result, authoritarian leaders win elections and use all means to remain in power for long periods.

Numerous studies are looking to understand the causes for people to lose faith in political leaders, institutions.

People advocate for restrictions on our freedoms and to circumvent the rule of law.

While studies search for answers, it is desirable to act and prepare to meet the challenges of the 21st Century.

Our traditional ways to seek solutions may not be agile enough to prevent our societies from rushing towards authoritarianism.

The big question is, where do we invest scarce resources to boost Lincoln’s concept of democracy as the government of the people, by the people, for the people?

There is a sense of urgency in looking for ways and means to reboot our democracies.

Expressing the urgency of the problem faced by democracies, President Joe Biden of the USA has convened a Leaders’ Summit for Democracy.

There will be an in-person Summit in late 2022 to assess progress made on resolutions taken this December.

Looking for experience could be helpful

Once he was in control, they cooperated with him. Mommsen considers that the Holocaust was more the result of cumulative radicalization rather than a well-executed master plan.

Complacency is part of human nature.

People are motivated by power, prestige, and wealth.

These are legitimate motivations; however, they should be limited by the public and national interests.

It is crucial to promote leaders who have the public interest at heart.

Leaders in the digital age need to understand the tools required to manage information and exercise critical thinking.

Good leadership will strengthen institutions, promote the rule of law and contribute to good governance.

A massive global programme to provide potential leaders (several thousand) with practical and effective tools to meet the challenges of the digital age is not only feasible but highly desirable.

The aim is to remove fertile conditions for populist, extremist and authoritarian movements to emerge.

It is appropriate to remember Nelson Mandela, one of the great leaders of the 20th Century, who offered a compelling argument to invest in people. He believed that education is the most powerful weapon which you can use to change the world.

The proposed programme is the investment needed to empower leaders for the digital age.

What kind of programme?

The programme should be sensitive to the culture and the history of the local environment.

Leaders need to represent the community, the society where they will exercise their leadership.

The approach adopted for this proposal is that leadership in the Digital Age needs agents of change with tools to exercise leadership effectively, regardless if it is in the private sector, civil society, politics or government.

The methodology to engage beneficiaries will be vital for the programme’s success.

The procedure should find ways to accelerate the number of leaders to keep up with rapid technological changes.

Agents of change are more likely to be found among youth.

The recruitment of participants should represent the demographics of a country.

Workshops will be favoured and will concentrate on real challenges faced by participants.

They will stimulate intersectionality.

Group sessions will be held, keeping in mind that most participants will be carrying on with their regular jobs.

In the project’s design stage, it will be possible to know precisely which topics will be selected, how long it will take to cover them, and what resources will be required.

The following are only examples of what a programme could encompass.

4.            What do leaders do? Leaders have practices that help them exercise leadership.

8.            Understanding movements and how they relate to political parties?

The urgency to prepare leaders for the Digital Age calls for a substantial investment in creating a democratic leadership system.  It could be a key deliverable of the upcoming Leaders Summit for Democracy.

Such an initiative could be led and overseen by The Elders, an organization founded by Nelson Mandela under the leadership of Mme. Mary Robinson (Former President of Ireland).

This Global Organization can provide the credibility needed to carry on a sustainable programme for democracies worldwide.

Their network can raise funding to implement the proposed Global Programme for leaders of the Digital Age.

Governments would support the initiative and work with their democratic institutions to ensure the successful implementation of the programme in countries of their choice.

The creation of a broadly based cadre of future democratic leaders dedicated to strengthening democratic institutions could effectively demonstrate that democracy is still the best means for people to achieve a good quality of life and enjoy the benefits of good governance.

I look forward to readers’ comments and suggestions.

Jean-Paul Ruszkowski is a general practitioner with 40 years of professional experience. He has held high-level positions in the private sector, the public sector and most recently as CEO of an NGO, the Parliamentary Centre, dedicated to strengthening the legislative power of the institution that represents citizens of various political leanings, legislates and oversees the executive.

His experience is multidisciplinary and multicultural. In addition to his duties in Canada He has worked in Africa, Latin America and Europe.

He is recognized by his peers as a team builder and a promoter of empowerment. He has contributed to the dialogue and harmonization of multiple interests in the implementation of governance-strengthening projects.

Throughout his career he has sought to innovate.

He is a strong supporter of the importance of leadership in the sustainability of institutions.

As CEO of the Parliamentary Centre, he has participated in numerous knowledge exchange seminars with multiple stakeholders in governance.

He works in English, Spanish and French.

He likes to hike in the mountains and travel.